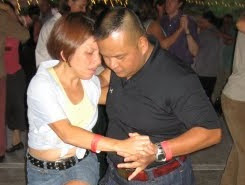 One of the best indications that a woman is having a wonderful time at tango is her facial expression during the tanda. Some look like they're in a trance, some wear a smile, some are in a sublime and heavenly place.
When women are having a NOT so good time, her expressions will be in stark contrast. She looks bewildered, shocked, confused, annoyed, and sometimes, upset. A myriad of emotions, other than happy. Instead of enjoying the tanda, she's trying to think, analyze, compensate, and figure out what the lead is trying to do.
She needs to FEEL you
Improving one's leading technique increases the chances of your partner's fulfillment during the time spent with you. The lead needs to be unmistakeably clear, concise, deliberate, and vibrant. You need to tell her (without words) what you want to happen.
She needs to understand what you're trying to do without vagueness and ambiguity. You shouldn't talk—She needs to feel you. You need to convey your thoughts, wishes, and intentions with the language of your body. At the same time maintaining balance, fluidity, floor craft, navigation, and musicality. She needs to feel that you care, are confident, and that you will protect her.
When a woman wears facial expressions of apprehension...
This happens when the lead is not quite sure of what he wants to do. The leader's lack of confidence is manifested by fizzled leads. He starts something, becomes tentative, the movement fades. The follow snaps out of her concentration and wonders, "What's next?" This causes lapses on concentration on both sides. When the leader does decide to continue, he catches the follow thinking, and an awkward close embrace collision occurs. If this persists throughout the tanda, it becomes extremely frustrating for the follower.
The leader who does NOT use his core as the source of the lead, tends to generate the same frustrated look from her, as the lead dissipates, it causes her to wonder, "Where did you go?"
This type of leader creates a mental and physical challenge for the follow. Especially, when the lead is obsessed with fancy footwork, patterns, and moves while lacking a fundamental understanding of basic technique. The follow gets knocked off her axis and muscled and/or forced into doing goofy stuff. It feels awkward, contrived, sometime dangerous.
"What are you doing?" is the question written on her face.
Followers look annoyed with leaders who dance as if they're conducting a band. Their shoulders pop up and down with their arms pumping with the beat. They generate so much body noise that it obfuscates whatever it is they are trying to lead.
Several followers have told me that this is one type of people they really don't care for. This happens when the lead heaves the woman around like a sack of potatoes. It hurts them, it shocks them, and is not pleasant by any means.
Several follows have asked me to help them avoid several people before. Because, according to them, "They're creepy."
Their practices of malevolence goes from stroking, roving hands, squeezing, licking, and a lot of other things which infuriates decent tango dancers.
Tango is intimate enough as it is, and these behaviors are simply inexcusable.
Trying to achieve her look of "Bliss"
I would like to kindly refer you (dear reader) to some of my older posts as reference. My blog is all about the leader's steady improvement down the path of making it "All about her."
Her sublime tango look
Pictures courtesy of the masterful eye of Paul Yang's Seattle Tango Magic 2009 album. Thank you Paul!

Ruben always says, your face has to dance too!
Not with fake orgasmic looks, but with tango attitude on the part of both in the couple.

When annoyed, frustrated, creeped out...just give them that Goodbye Look.

I hate the 'No Technique-Step Leaders'. I've felt harrassed and stressed dancing with them especially as they are mindless of my state of mind. I've even stopped moving entirely in the middle of a milonga and the guy just kept going on with the beat until I told him to stop.

@ tangocherie: I agree. The face exemplifies the feeling of the soul. One needs to tango with sincerity to make the experience worthwhile. Otherwise the fake orgasmic looks feels just as fake.

@ Johanna: Yes, it was. Should I find that this happens again, I'll have to "talk" to the perpetrator.

@ Golondrina: I sympathize. When this happens again, invoke the power of the resolute "THANK YOU..." and take your leave. It is your perogative.

I've looked over some Facebook pictures of milonga events I've attended. I'm proud to say that some of my tanda partners have the tango look frozen digitally, but some have a routine, tedious look on their face. Gotta work on that. At least thankfully none have the "WTF are you doing?" look

AmpsterTango
Seattle (suburbs), Washington, United States
There comes a time in a one's life where the pursuit of adventure looses it's fire. I've been a soldier, a sailor, I love to tinker, but I've never been a tailor. I've been around the world to exotic places, cavorting amongst exotic peoples... These are now, just fond and distant memories. Discovering Argentine Tango, once again lit the fire in my soul. I turned into a "Tango Zombie." I ate, slept, and breathed tango. Time passes, and we learn from our experiences and become wiser. It no longer consumes me. But, it has become part of who I am, and life goes on

ampstertango@gmail.com
Where I, and my tango used to be:
Un-making a "Tango Zombie"