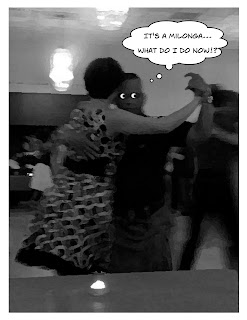 The milonga was MY nemesis for the longest time. It was the dance that made me feel uncoordinated, clunky, and clumsy. Attempting to dance a milonga made me feel so inadequate. In an attempt to cope, I researched the milonga from a historical and technical standpoint. None of my research helped.

Realizing this inadequacy, I decided to do something about it.


My milonga pitfalls
I decided to do some introspection and figure out what it was that made my milonga dancing "Blow up." I postulated that, knowing my faults, I would know how to address them.

Milonga epiphany
As in any endeavor that you spend time, effort, and money in, when it works, it becomes an enlightening and magical experience. It is therapy for a frustrated milonga heart.

In the end...
I can consider myself as a passable milonga dancer. Not bad, not painful, but passable. It took so much time. It took so much effort. But in the end, my reward is the extra space that I and my partner can dance in when the milonga floor opens up when a milonga tanda starts.
Posted by AmpsterTango at 02:17 3 comments:

A journey through my incompetence 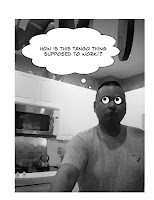 In practicing the way of tango, one of my most poignant "lessons learned" was that I was not as good as I thought I was.

In order to (continually) improve, I first had to admit it to myself that I was flawed. Secondly, I had to discover and learn what my shortcomings were before I could learn how to deal with them.

I can't lead someone, if I can't tell where she had her weight. I didn't know how to tell if she was planted, or if she had landed firmly on one leg. This malady caused me to Not know know if my partner had completed the step I was leading. I frequently knocked her off her axis, and always rushed her into steps before she could complete the previous one I just (tried) to lead
Coming fresh from the ballroom world, I had (mistakenly) assumed that my previous dance experience can be transposed into tango. I tried, and it didn't work. The results were quite embarrassing.
I thought that if I memorized a few steps, it would carry me along. It was like this in the ballroom world. Why would it not work in tango? Painfully as it was, most especially for my follows. This did not work. It made for a boring and mechanical dance.

I thought that when my tango teacher taught a move, everyone was supposed to "Get it." So, I expected the follow to "Get it" too. This only succeeded in frustrating me, and my follows to not want to dance with me.

I lead, she follows... At my pace! Now, what was I thinking??? Tango is an expression of emotion. It's neither a race, nor a competition.

When I first started tango, I preferred nuevo music. It was contemporary, had a heavy beat that I could hear. I could relate to it.
I didn't like traditional tango music because it was old and scratchy—and there was NO BASS! I couldn't follow the music, because I couldn't find the repetitive patterns.
When I danced ballroom, we were taught that tango was a "Dancer's dance." In ballroom, that was simply a standard line they feed you. Transcending into the real tango world, I now truly understand why that is.
Posted by AmpsterTango at 12:44 7 comments:

AmpsterTango
Seattle (suburbs), Washington, United States
There comes a time in a one's life where the pursuit of adventure looses it's fire. I've been a soldier, a sailor, I love to tinker, but I've never been a tailor. I've been around the world to exotic places, cavorting amongst exotic peoples... These are now, just fond and distant memories. Discovering Argentine Tango, once again lit the fire in my soul. I turned into a "Tango Zombie." I ate, slept, and breathed tango. Time passes, and we learn from our experiences and become wiser. It no longer consumes me. But, it has become part of who I am, and life goes on

ampstertango@gmail.com
Where I, and my tango used to be:
Un-making a "Tango Zombie"